Fibrous, glandular and fatty tissues make up breasts. The first two tissues are connective and produce milk, if one has more of these fibrous and glandular tissues, it is also called “fibroglandular tissue” and the breasts are denser. For most women, breasts become less dense with age. Dense breasts are not a medical condition, it is rather normal. But the denser the breast, the higher the risk for breast cancer. A woman is 4 to 6 times more likely to get breast cancer than a woman that has more fatty tissues.

Worldwide, breast cancer is the leading cancer type in women. According to the US National Cancer Institute, common breast cancer symptoms are a lump in a breast, a change in breast shape, dimpling of the skin, fluid from the nipple, a newly inverted nipple or a red scaly patch of skin on the breast. To detect breast cancer in its early stages, the breast density plays an important role. 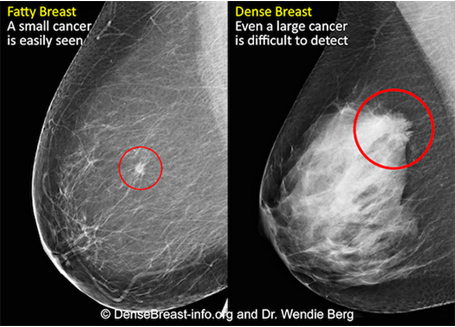 It is important for women to do a mammography to know whether they have dense breasts. For doctors it is harder to detect breast cancers on a mammography of a woman with dense breasts. Consequently, there is a higher risk to miss cancers. In addition to the problems of detecting cancer in dense breasts, this condition also leads to a higher risk of getting breast cancer for which the reasons are still unclear. But dense breasts must be considered along with other risk factors. Besides being a woman, the biggest risk factors are the family history, obesity, some forms of hormone replacement therapy and others.

The key role of detecting breast density in the fight against cancer are regular mammograms. Patients must let the doctors and nurses know of their medical history and if there is anything that increases the risk for breast cancer, like the breast density. Based on a mammogram, radiologists read the results using the Breast Imaging Reporting and Data System (BI-RADS). This standard system uses an assessment scale from 1 through 6 to indicate, if or how cancerous the findings are. Additionally, the BI-RADS includes a score for breast density on a scale from A through D.

Women typically did not receive information about breast density in the past. This has been changing over the past decade. Besides the need for more awareness among women and better practices in hospitals and among radiologists to directly transfer the knowledge about the breast density based on mammography to the patient, there is a need for more intelligent solutions. Mammography results need to be constantly saved and updated in a patient’s health record. The goal is to advance the early detection of breast cancer by having a more intelligent and inclusive system.

Kipoly is transforming the healthcare industry by offering sustainable solutions such as EHR, EMR and artificial intelligence-based CDSS. We assist health organisations to leverage their data and optimise their clinical operations. High integrability and intuitive understandability are what we define ourselves with.

Kipoly2021-05-21T10:32:36+00:00
We use cookies on our website to give you the most relevant experience by remembering your preferences and repeat visits. By clicking “Accept”, you consent to the use of ALL the cookies.
Cookie settingsACCEPT
Manage consent

This website uses cookies to improve your experience while you navigate through the website. Out of these, the cookies that are categorized as necessary are stored on your browser as they are essential for the working of basic functionalities of the website. We also use third-party cookies that help us analyze and understand how you use this website. These cookies will be stored in your browser only with your consent. You also have the option to opt-out of these cookies. But opting out of some of these cookies may affect your browsing experience.
Necessary Always Enabled
Necessary cookies are absolutely essential for the website to function properly. This category only includes cookies that ensures basic functionalities and security features of the website. These cookies do not store any personal information.
Non-necessary
Any cookies that may not be particularly necessary for the website to function and is used specifically to collect user personal data via analytics, ads, other embedded contents are termed as non-necessary cookies. It is mandatory to procure user consent prior to running these cookies on your website.
SAVE & ACCEPT
Go to Top